I reveal the story and meaning behind Blathering Blatherskite, the second song on my debut EP.

Often I hear songs that I think would be a good sample for a rap. I attempt to log them in my memory and then promptly forget them, never trying to make the beat a reality because of a lack of technical expertise. “Begin Again” by The Summer Set is one of these songs. The opening sound effects are a perfect intro. The subsequent guitar riff and drum beat are simple yet catchy. Lead singer Brain Dale even quasi-raps over them himself. I always knew I wanted to spit over the track, I just never made it happen.

“Begin Again” appears on The Summer Set’s second album Everything’s Fine, which they released in July 2011. I released The Launchpad EP in February 2014. Let that lapse between inspiration and confidence be a lesson to anyone with ideas they are hesitant to execute. Like everything else on my EP, Blathering Blatherskite didn’t start to come into clearer focus until I conceptualized it as a DuckTales EP. Then I realized that the first half of the original song’s hook worked perfectly with the double entendre of “Launchpad” that I was working with:

My song could literally be a launchpad, so I named it This Is My Launchpad. That idea didn’t change until my girlfriend made me realize something.

She had the idea of adding the Iron Man thruster sound effects from when Tony Stark was testing the suit in the original movie. (WordPress says “thruster” is spelled incorrectly, funny.) From there I decided to incorporate the dialogue from that scene at the beginning and end of the track. That framing device is what I’m most proud of with this track It tells a story using the metaphor of Gizmoduck and Iron Man.

Before penning the lyrics, I rewatched some of Gizmoduck’s origin story (a 5 episode arc on Ducktales) to remind myself of it. I then melded my work experiences with Fenton Crackshell’s narrative. The contrast between Fenton’s servile personality outside of the Gizmoduck attirue and his confident bravado while in it are the perfect metaphor for how I was trying to concretize the idea of being a rapper. Becoming one is a transformation just like when Fenton yelled “Blathering Blatherskite” and found the suit for the first time.

The third verse is my favorite. It features a couple of references to one of my favorite nerdcore artists The Former Fat Boys. The line “hey Ma-Ma I’m a rapper and I’m doing just fine” doubly nods to their track “Hey Ma! (I’m A Rapper)” and how Fenton calls his mother Ma-Ma. The line “I’m Justin, I’m Justin, your motherfuckin’ face needs readjustin'” is an appropriation of lyrics from their hilarious tongue-in-cheek anti-Justin-Beiber song. The verse then ends with some of my favorite lines of the EP, the last rhyme of which still gets stuck in my head:

This is gas leak rap, did it ever happen?
Ask me back you know I love this flappin’
It suits my true grit like I’m Gizmoduck
So when I do spit, there is no luck 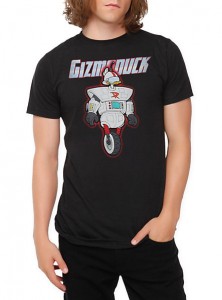 (Note: What gas leak rap is exactly will be expanded upon in the future.)