The Spine of Interstellar

I looked into the eye of the iconic bookshelf in Christopher Nolan's Interstellar and what I saw was beautiful.

Recently, Wired released an article revealing 9 Easter Eggs From the Bookshelf in Interstellar. For those people who haven’t seen the movie yet, the bookshelf and the room its housed in play a major role in the movie, acting as a sort of backbone that culminates in the film’s emotional climax.

The Wired article approaches the set piece on a detailed level, pointing out specific books that line it because director Christopher “Nolan, for his part, is absolutely using the books to communicate…: The volumes he chose for [the] shelves relate to the characters in the film—and to his conceptual world. ” They note such epic works as The Stand by Stephen King, Emma by Jane Austen, and A Wrinkle in Time by Madeleine L’Engle. However, even though they spoke to Nolan directly about what he chose to include, their article curiously doesn’t note two prominently visual classics. 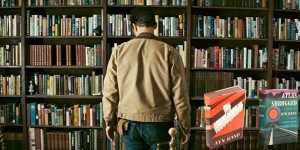 The appearance of these two novels doesn’t answer any questions. Watch any Nolan movie and it’s clear he must have read Ayn Rand at some point. Interstellar is so explicit with its similarities to Rand’s writing that The Hollywood Reporter reviewer Stephen Dalton snidely wrote, “Only they can save humanity with their heroic individualism and rugged pioneer spirit. … Wait, does any of this sound familiar? Has Nolan been reading Ayn Rand’s Atlas Shrugged?” Dalton is referencing a statement, among numerous others, by the film’s hero and protagonist Cooper:

That dichotomy is such a pointed concretization of a basic theme of Atlas Shrugged that Rand herself might have crafted it had she ever written a story about space travel. In fact, much of the movie reads like something Rand might have come up with. Cooper is a Howard-Roark-like figure, forced to forgo his talents in engineering and science for farming due to a world that refuses to recognize the importance of his skills…until he’s called on to save everyone. There’s even references to Lazarus which are easy draw as a parallel to the multiple mentions of Prometheus in Atlas Shrugged. Couple all of this with the ideas mentioned very explicitly as the climax nears and the choices Cooper makes based on them (not to mention the ending of The Dark Knight trilogy which I previously addressed) and it has to be asked:

Just how influential is Ayn Rand on Christopher Nolan?